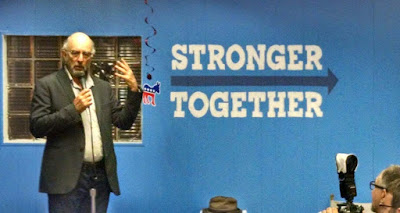 Tonight I went to the opening of the new Democrat Campaign Office in Kent. The guest speaker was actor Richard Schiff of "West Wing" fame, and the guy who was eaten by dinosaurs in The Lost World: Jurassic Park (he had a great story about that). He was a compelling speaker in a fantastically intimate setting. His talk was great but the Q&A was better as he interacted with the crowd. He got involved with politics during his years on the West Wing as he was educated about it on set. Now most of the cast is canvasing Ohio to elect Hillary. Schiff was a Bernie supporter but knows the platforms are very similar. He also knows Trump is dangerous. As it turns out, Bernie will be in Kent on Saturday but we probably won't be able to make it.