We discovered that Jack has the rare gift of "Monkey Toe." It's clearly a recessive trait in his parents as neither of them can grasp objects or even separate the big toe from the so called chain toes.

First signs were noted when Jack woke Dad by repeatedly grasping his fingers under the covers; initially Dad thought they were holding hands. Monkey Toe will be handy at Kindergarten and well beyond. 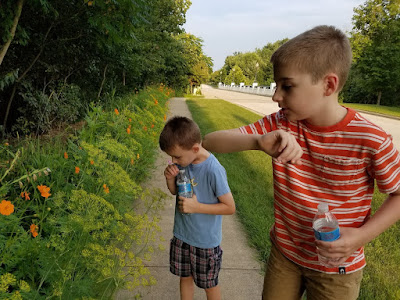 In this photo, they are pretending to sneeze. On the first day of school Jack and his friend decided to spend recess introducing themselves to the new kids. That made his parents warm and fuzzy inside. Unfortunately, Jack now has a cold (those new kids are so dirty!) so he's sleeping the day away. Luke is forced to be quiet...not an easy task, but he is trying.