I Trumped Trump at Hearthstone 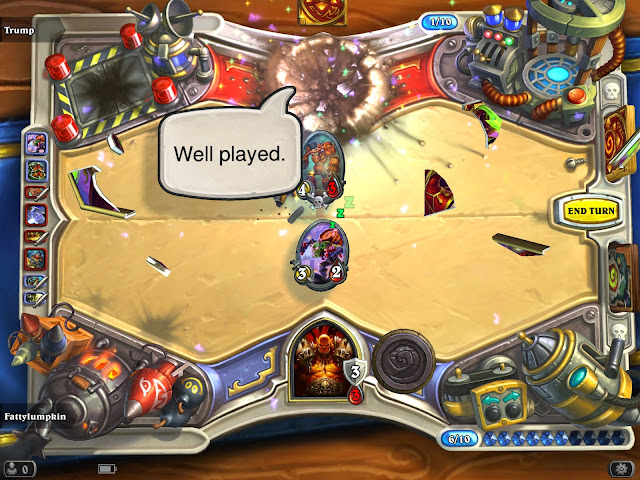 Not a single person that reads this will care but today I beat Trump in a game of Hearthstone (Not Donald, Jeff Shih). He’s a professional gamer who is estimated to make 150-200k per year playing Hearthstone (see article) and one of the world's best players. I watch his stream all the time because he’s instructional. The last 3-4 turns of our game were an amazing exchange of cards. On my final turn he had 1 health and I had 3 (6 with armor) but he had board control and my hand was empty. It ended with my Mad Bomber dealing his last barrel of damage to Trump’s face for the victory. The RNG (Random Number Generator) Gods were in my favor at the end but during the game they smiled on him more than once, too. It also seems we were both using experimental decks. This will never happen again because there are 30 million players and I won’t qualify for a high-end tournament. And he would just beat me next time. Fine by me. I beat Trump. Ever the gentlemen, he gave me a “well played” emote as his face exploded (see screen shot).