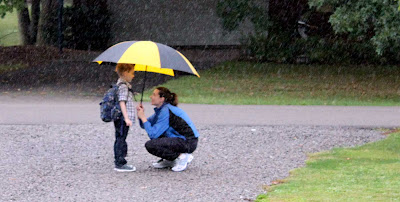 The secret to a good marriage is to make your wife stand in the rain while you take photos comfortably from the porch...oh, wait. Next time we'll try the car. On an unrelated note, Republican VP candidate Paul Ryan lied about his marathon personal record…by a lot. Runners and people who run marathons know their PRs. Here is the article and a link to the 1990 results. I largely avoid political opinion on this blog but this is such a clear example of how corrupt the Republicans are at this point in history. They even lie when they don't have to, so to speak. They'll say anything, just ask President Obama, or watch the RNC speeches. No wonder the Republicans discount fact checkers; you don't want pesky facts to get in the way. I suppose this makes Runner's World part of the "elite liberal media?"