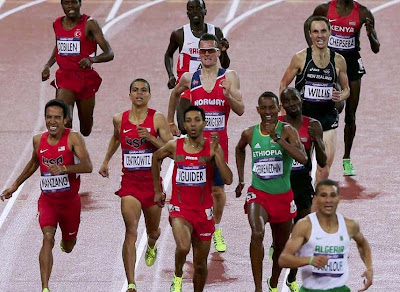 Another Olympic landmark race for the USA but this time in the 1500 meter, also known as the metric mile. Leonel Manzano (far left, above) of the US blasted the last 70 meters for a Silver, the first medal since Jim Ryan's 1968 run in this event. A story you won't hear much about is Matt Centrowitz Jr's 4th place finish (2nd from front-left); the most painful position in the world. At 22 he may be back in four years. I dug deep in my old photo album to find a photo of me and his father, Matt Centrowitz senior, a two time Olympian himself. For you New Yorkers, he was a multiple state champion, the first in NY to break 9 minutes for 2-miles, and still owns the 1500 state HS record of 3:43! The below photo was taken when I was a HS freshmen at the biggest (to this day) cross country meet in the country - the Manhattan Invitational. I recognized Centrowitz and Dillinger (his coach), sprinted across the field, and asked for a photo. 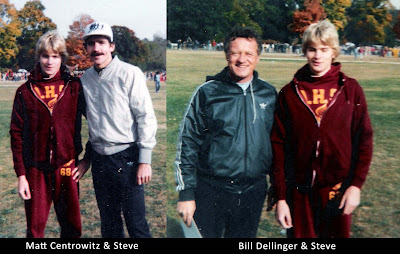 The famous Bill Dellinger took the photo and then posed with me while Centrowitz senior (a 13:11 5k in his day) got a shot of us. As a kid I was thrilled! I later went to the adidas cross-country camp directed by Dellinger, who, it should be noted, got a bronze medal in the 1964 Olympic 5k. He also trained Salazar who currently coaches Rupp (see recent post). Small world, really. Here is a cool piece with photo on the Centrowitz father-son team.